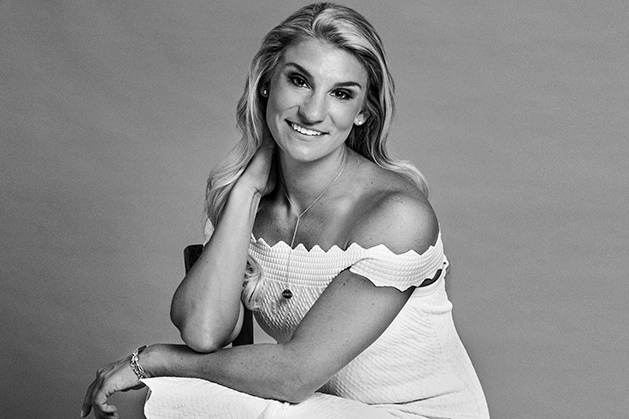 Dana Rogozinski '07 recently launched an original line of Holocaust remembrance jewelry inspired by the legacy of her grandparents and the lessons in philanthropy she cultivated at The Bolles School.

Called The J&E Legacy Collection and named after her grandparents Jakob and Ella Rogozinski, the jewelry company was developed in Israel and is now based in Jacksonville. A portion of each jewelry sale supports Holocaust education and scholarships.

"I hope this endeavor will carry on not only my grandparents' legacy, but of those who perished," Dana Rogozinski said.

She said her grandmother's story of bravery, honesty and courage has compelled her since she was a young student at Bolles. When she was in Grade 5, Dana's teacher invited grandmother Ella to speak to the class about her Holocaust experience during a unit on World History. Following that initial presentation, Ella visited Bolles as a guest lecturer on many other occasions to share her survival story.

"My grandmother's honesty, bravery and courage has stayed with me all these years," said Dana, recalling A5674, the numbers tattooed on her grandmother's forearm, and 56512, the numbers assigned to her grandfather in a forced labor camp. Ella was a Holocaust survivor of Auschwitz and Bergen-Belsen. "I realize it is up to my generation to keep the conversation of the Holocaust alive so that history does not repeat itself."

Dana took this conviction with her to Florida State University, where she received a degree in merchandising and product development. After studying fashion in Milan, Paris and London, Dana received a master's degree in business from Nova Southeastern University. She later worked in fashion and business in New York and Jacksonville as a buyer and product manager before spending a memorable year in Israel. There, she "spent time mastering the language, absorbing the culture and working for a start-up" and creating The Jakob and Ella Legacy Collection.

Dana said she developed much of her business' creativity, personal meaning and charitable purpose during her years at home and at The Bolles School.

"Since I was young, giving back was always an important lesson my parents instilled," Dana said. "The Bolles culture emphasizes academics, philanthropy and leadership. These ideals have served me well, and it is important to me that my new endeavor have a charitable component. Education, as well as giving back, are what my goals are in this new journey." The company's website is www.jakobella.com.