(Travel and host every other year)
Bolles and Qingdao Tourism School in China began an exchange program in 2009, enhancing the relatively new Chinese curriculum at Bolles. Qingdao students visit Bolles in January and February every other year, and Bolles students visit China during the summer the following calendar year. Bolles students will travel to China June 2019 and host in January/February 2020.

Bolles Students will travel in June 2019 and host in January/February 2020.

During this language and cultural exchange, available for any student in grades 9-11, Bolles students spend approximately 20 days in China with Bolles faculty member chaperones. For the first week, students attend classes at our sister school in Qingdao put their Mandarin to use in everyday settings, and get to know Chinese teenagers. Students live with host families from our sister school for this first part of the trip. Then the group travels to Xi’an and Beijing to visit historic sites and to participate in cultural activities.

“I went on the Chinese exchange program in 2017 and it was one of the best decisions I’ve ever made. I had been taking Chinese since 7th grade and I had always wanted to go to China since I first heard about the exchange program. I definitely feel like my Chinese conversation skills improved after being surrounded by primarily Chinese speaking people for three weeks. One of my favorite things to do was bargain with street vendors or when shopping at the silk market. I also thought climbing the Great Wall of China was one of the coolest things I will ever do in my lifetime. I highly recommend this program for anyone who has been taking Chinese and truly wants to experience the Chinese culture in all aspects.”—Anna Csikai '19

“Going to China was one of the coolest experiences in my life. I’ve been to numerous places outside of the country, but none were like China. When we first arrived in Beijing, it was really a culture shock. No one spoke English and everybody would stare at us. However, once I met the students at Qingdao School, I felt more welcomed and comfortable. All of the students were so excited to see us as they bombarded us with pictures and tested our Chinese abilities. For over a week, we stayed in the Qingdao dorms, but often left to hangout with our host families and their friends. On the weekend, most of us went out with our Chinese hosts—exploring the city, trying new foods, going to the zoo, ice skating, singing karaoke, etc. Hanging out with our host families gave us a chance to explore the Chinese culture and analyze the Chinese people’s way of life. After a saddened goodbye to the Chinese students at the Qingdao School, my classmates and I headed off the explore China’s most famous places. With the presence of multiple experienced tour guides, we journeyed to places like the Forbidden City in Beijing, the Great Wall, the Terracotta Army in Xi’an, and Shanghai. The second half of the trip was met with great relief as we stayed in nice hotels with American breakfasts— two things it’s easy to say everyone was missing. By the end of the trip, no matter if you were in Chinese 1 or Chinese 4, everybody admitted that their Chinese significantly improved. I, myself, have to admit that I began to function and think in Chinese. I think both my classmates and I can agree we wouldn’t change a thing about this trip as it was a life-changing experience.”—Stefan Mostovych ’19

“The China Exchange Trip was an amazing experience. I was very nervous at first to go all the way to China for 20 days because I have never gone so far away from home without the comfort of my family. However, I quickly adapted and looking back I am so happy that I stepped out of my comfort zone. It was so cool to use all the knowledge we have learned in the classroom and apply it in real life scenarios. It was so amazing to experience the Chinese culture from a Chinese student perspective, as it gave us the opportunity to compare our lifestyle to that of a student of the same age. Not only did this trip improve my speaking and listening abilities, but it gave me the amazing opportunity to interact first-hand with native families that I would not have been able to do otherwise. Despite, all the advantages to our Chinese learning, this trip also provided me with new Bolles friends in different grades that I most likely would not have been able to become such good friends with. I definitely recommend taking advantage of the opportunity to go to China with Bolles. Even though you could go with your families, I feel that going with Rothschild Laoshi, Li LaoShi, and other Bolles students give you a much different and incredible perspective of life in China!”—Amelia Emas ’20

“In the summer of 2017, I traveled with my peers to immerse ourselves into Chinese culture and language. Over the course of the trip, we went to Qingdao, Beijing, Xi’an, and Shanghai. The majority of our trip was in Qingdao, specifically the Qingdao School of Tourism. Being in such a beautiful coastal city, I thoroughly enjoyed being toured around the city by the Qingdao students. My friends and I went to the beach, a mall, and a restaurant. We also made dumplings with the Qingdao students and ate a home-cooked meal. At the Qingdao School of Tourism, we learned about Chinese holidays, the zodiac, and modern culture. We also experienced day-to-day life for students in China. Throughout the rest of the trip, we saw many Chinese historical sites such as the Great Wall, the Terracotta Army, and the Forbidden Palace. Overall, the trip was so much fun. I definitely think my Chinese improved and I learned so much about Chinese culture.”—Julia Butler ’19

“As both a host to the Qingdao students, and a visitor in China, I experienced cultural exchange in its truest form. For two weeks I hosted a very kind and fun girl, Nora, from the Qingdao Tourism School. Also, I was fortunate enough to spend a lot of time with another girl, Jennifer, from the same school. Over the two weeks, all three of us learned a lot from each other and overall had a great time…living as a foreign guest in Qingdao helped me grow by improving my understanding of the Chinese culture and language profoundly. Nora and Jennifer opened my eyes to the world of a teenager in a changing China…Perhaps the most important experience I gained from living with Nora was learning how to understand a culture so profoundly different as I grew to accept the sometimes contrasting views of my new friend."—Camille McCutcheon '12 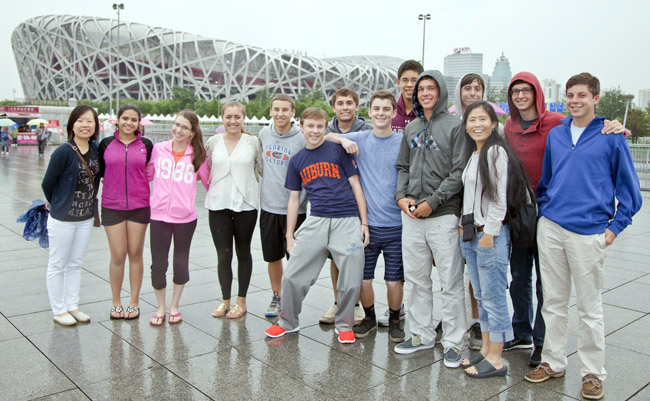